Greece is facing a humanitarian crisis 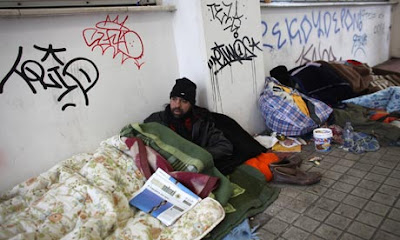 The EU's own poverty standards show that Greece is in crisis. But member states won't admit their 'bailout' was to blame

'The number of homeless people has risen to unprecedented levels for a European country: unofficial estimates put them at 40,000.' Photograph: Oli Scarff/Getty Images
European societies typically assume that humanitarian crises only take place in the aftermath of natural disasters, epidemics, wars or civil conflicts.That such a crisis could happen in a European country, especially one that is a member of the European Union, seems out of the question to many of us.

And yet a number of experts would maintain that Greece is currently in the centre of a humanitarian crisis. The head of Médecins du Monde, Nikitas Kanakis, the largest and most prominent NGO in Greece, was among the first to declare it openly. The port area of Perama, near Athens, in particular, is in the midst of a humanitarian disaster. The Medical Society of Athens, the largest professional body of its kind, has even sent a formal letter to the UN asking for intervention.
Διαβάστε περισσότερα »
Αναρτήθηκε από You Pay Your Crisis στις 7:50 μ.μ. Δεν υπάρχουν σχόλια: 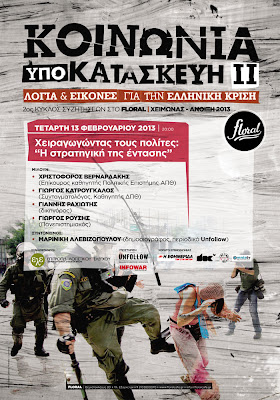