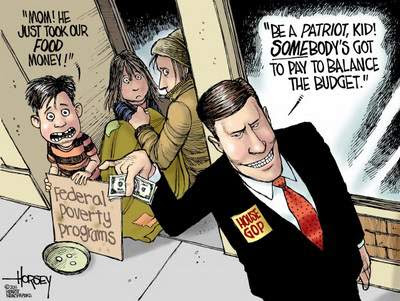 A potent myth is being used to justify economic capture by a parasitic class.

By George Monbiot, published in the Guardian 24th September 2012

We could call it Romnesia: the ability of the very rich to forget the context in which they made their money. To forget their education, inheritance, family networks, contacts and introductions. To forget the workers whose labour enriched them. To forget the infrastructure and security, the educated workforce, the contracts, subsidies and bail-outs the government provided.
Every political system requires a justifying myth. The Soviet Union had Alexey Stakhanov, the miner reputed to have extracted 100 tonnes of coal in six hours. The United States had Richard Hunter, the hero of Horatio Alger’s rags-to-riches tales(1).
Both stories contained a germ of truth. Stakhanov worked hard for a cause in which he believed, but his remarkable output was probably faked(2). When Alger wrote his novels, some poor people had become very rich in the United States. But the further from its ideals (productivity in the Soviet Union’s case, opportunity in the US) a system strays, the more fervently its justifying myths are propounded.
As the developed nations succumb to extreme inequality and social immobility, the myth of the self-made man becomes ever more potent. It is used to justify its polar opposite: an unassailable rent-seeking class, deploying its inherited money to finance the seizure of other people’s wealth.
Διαβάστε περισσότερα »
Αναρτήθηκε από You Pay Your Crisis στις 11:59 π.μ. Δεν υπάρχουν σχόλια: Σύνδεσμοι σε αυτήν την ανάρτηση