The Eurozone Crisis - An Opportunity For the Left?


Robin Hahnel is Professor of Economics at Portland State University. His most recent book is Economic Justice and Democracy and he is co-author with Michael Albert of The Political Economy of Participatory Economics. He spoke to NLP's Alex Doherty on the continuing crisis in the Eurozone.

The election of Francois Hollande and the strong showing of the left in the recent elections in Greece has led to hope that a shift away from austerity policies may become politically possible. What is your view?

Austerity policies are not only terribly unfair, they aggravate the problem they are supposed to solve by shrinking economies which only makes it harder to pay off debts. Left, progressive, and competent macroeconomists have been pointing this out to no avail for over three years. Financial markets are now clearly of the same opinion. Lenders are now raising risk premiums for all countries whose economies are being shrunk by austerity policies irrespective of whether or not their governments are “behaving,” i.e. fulfilling all austerity obligations to the letter no matter how onerous, or “misbehaving” i.e. failing to enforce every last austerity measure negotiated. Unfortunately, those in charge of the European Commission and the European Central Bank have paid no attention to those speaking out against austerity, and instead have insisted on repeated the same mistake Herbert Hoover made eighty years ago.
Διαβάστε περισσότερα »
Αναρτήθηκε από You Pay Your Crisis στις 9:02 μ.μ. Δεν υπάρχουν σχόλια: Σύνδεσμοι σε αυτήν την ανάρτηση

Who is Responsible for the Greek Tragedy?

SEATTLE – Greece is following the road taken by several other crisis-ridden emerging economies over the past 30 years. Indeed, as I argued earlier this year, there are stunning similarities between this once-proud eurozone member and Argentina prior to its default in 2001. With an equally traumatic implosion – economic, financial, political, and social – now taking place, we should expect heated debate about who is to blame for the deepening misery that millions of Greeks now face.

CommentsThere are four suspects – all of them involved in the spectacular boom that preceded what will unfortunately prove to be an even more remarkable bust.
CommentsMany will be quick to blame successive Greek governments led by what used to be the two dominant political parties, New Democracy on the right and PASOK on the left. Eager to borrow their country to prosperity, they racked up enormous debts while presiding over a dramatic loss of competitiveness and, thus, growth potential. Some even sought to be highly economical with the truth, failing to disclose the true extent of their budgetary slippages and indebtedness.
Διαβάστε περισσότερα »
Αναρτήθηκε από You Pay Your Crisis στις 6:07 μ.μ. Δεν υπάρχουν σχόλια: Σύνδεσμοι σε αυτήν την ανάρτηση 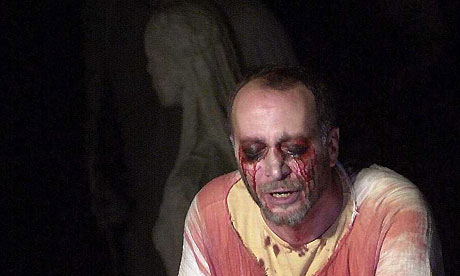 The Greek euro tragedy is reaching its final act: it is clear that either this year or next, Greece is highly likely to default on its debt and leave the eurozone.

Postponing the exit after the June election, with a new government committed to a variant of the same failed policies (recessionary austerity and structural reforms), will not restore growth and competitiveness.

Greece is stuck in a vicious cycle of insolvency, lost competitiveness, external deficits, and ever-deepening depression. The only way to stop it is to begin an orderly default and departure, co-ordinated and financed by the European Central Bank, the European Union, and the International Monetary Fund (the troika), that minimises collateral damage to Greece and the rest of the eurozone.

Greece's recent financing package, overseen by the troika, gave the country much less debt relief than it needed. But, even with significantly more public-debt relief, Greece could not return to growth without rapidly restoring competitiveness. And, without a return to growth, its debt burden will remain unsustainable. But all of the options that might restore competitiveness require real currency depreciation.
Διαβάστε περισσότερα »
Αναρτήθηκε από You Pay Your Crisis στις 4:10 μ.μ. Δεν υπάρχουν σχόλια: Σύνδεσμοι σε αυτήν την ανάρτηση

Greek leftist leader Alexis Tsipras: 'It's a war between people and capitalism'

"I don't believe in heroes or saviours," says Alexis Tsipras, "but I do believe in fighting for rights … no one has the right to reduce a proud people to such a state of wretchedness and indignity."

The man who holds the fate of the euro in his hands – as the leader of the Greek party willing to tear up the country's €130bn (£100bn) bailout agreement – says Greece is on the frontline of a war that is engulfing Europe.

A long bombardment of "neo-liberal shock" – draconian tax rises and remorseless spending cuts – has left immense collateral damage. "We have never been in such a bad place," he says, sleeves rolled up, staring hard into the middle distance, from behind the desk that he shares in his small parliamentary office. "After two and a half years of catastrophe Greeks, are on their knees. The social state has collapsed, one in two youngsters is out of work, there are people leaving en masse, the climate psychologically is one of pessimism, depression, mass suicides."
Διαβάστε περισσότερα »
Αναρτήθηκε από You Pay Your Crisis στις 2:01 μ.μ. Δεν υπάρχουν σχόλια: Σύνδεσμοι σε αυτήν την ανάρτηση