Austerity in Europe: what does it mean for ordinary people?


Austerity has been the main prescription across Europe for dealing with the continent's nearly three-year-old debt crisis, brought on by too much government spending. But what does it mean for the average European? Imagine paying sales tax of 23% or more. Or having your wages cut by 15%. Or, if you're in Ireland, both. Austerity comes in many forms: higher taxes, fewer state benefits, more job cuts, working longer until retirement, you name it.

Here's a look at some of Europe's austerity pain: 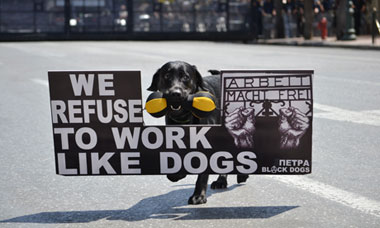 A protest dog during the May Day demonstrations in Athens, Greece Photograph: Nikolas Georgiou/Demotix/Corbis
Greece, one of three eurozone nations to need an international bailout, has cut spending on just about everything it can – public sector salaries, pensions, education, health care and defense. As a result, unemployment has soared to over 21%, fuelling social unrest that has sometimes turned deadly. In the last two years, riots have erupted frequently and the country's near-daily strikes and demonstrations have shut down schools, airports, train stations, ferries and harmed medical services.
Διαβάστε περισσότερα »
Αναρτήθηκε από You Pay Your Crisis στις 5:56 μ.μ. Δεν υπάρχουν σχόλια: Σύνδεσμοι σε αυτήν την ανάρτηση

Eurozone crisis: democracy trumps austerity but will the euro survive?

It happens like this. The election result in Greece means pro-austerity parties lack the parliamentary support and the moral authority to govern. Demands from Athens for the tough bailout conditions to be softened are turned down flat by the International Monetary Fund, the European Central Bank and the European Commission.

Political impasse in Greece leads to a second general election being called for next month. Angela Merkel makes it clear the next tranche of cash to keep Greek banks and the Greek state solvent will not be given unless the plan is adhered to in full. The strains on the single currency become intolerable; Greece leaves the euro and defaults, starting the process by which monetary union unravels.

In May 2010, when David Cameron and Nick Clegg were negotiating the terms of their coalition agreement and Greece received its first package of financial support, the idea that Europe was about to be gripped by a crisis that would put monetary union in peril was ridiculed. On Monday, as the euro fell on the foreign exchanges, the Greek stock market plunged and investors piled into the safe haven of German bunds, it no longer seems quite so far-fetched.
Διαβάστε περισσότερα »
Αναρτήθηκε από You Pay Your Crisis στις 5:07 μ.μ. Δεν υπάρχουν σχόλια: Σύνδεσμοι σε αυτήν την ανάρτηση