Amid the Echoes of an Economic Crash, the Sounds of Greek Society Being Torn 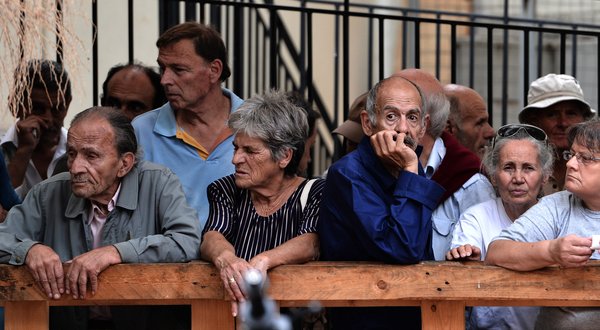 ATHENS — The cafes are full, the night life vibrant and the tourists still visiting in droves, but beneath the veneer of normalcy hereGreece is unraveling. In good times, money papered over some of the problems. As the economic crisis grinds along, austerity is fraying the bonds of civility, forcing long-submerged divisions to the surface.
Members of the neo-Nazi Golden Dawn party, who are widely seen to have the support of the police, clash violently with leftists and immigrants, raising fears of the precariousness of the rule of law. But the discord is not confined to them.
Lawmakers, increasingly mired in corruption scandals that alienate the public, curse one another in Parliament. Friends fall out, disagreeing over how deep the country’s troubles run and who is to blame.
The divisions are not only political. With unemployment at 25 percent, and exceeding 50 percent for young people, tensions are rising between generations, public- and private-sector workers, haves and have-nots.
“In Greece today, there are people with nothing to lose, and they’re dangerous,” said a popular blogger, Pitsirikos, as he sat in a cafe here. “If something happened, it would be like pouring gasoline on a fire. From moment to moment, things change completely. It’s not stable.”