ΠΗΓΗ: Democracy Now1
Greece is bracing for protests after eurozone finance ministers concluded a deal that will provide a $170 billion bailout in return for another round of deep austerity cuts. The bailout is opposed by several unions and left-wing groups in Greece over new cuts and layoffs imposed on public sector workers. We’re joined by Paul Mason, economics editor at BBC Newsnight and author of the new book, "Why It’s Kicking Off Everywhere: The New Global Revolutions." He has just returned from Greece. "What makes the headlines are, of course, the riots," Mason says. "What doesn’t make so many headlines is what is happening to real people... We are living in a time where the world has, in the last couple of years, erupted in a way that many people thought they would never see again since the 1960s... The underpinnings of this new global unrest are that...people are sick of seeing the rich get richer during a crisis." [includes rush transcript]
Αναρτήθηκε από You Pay Your Crisis στις 11:50 μ.μ. Δεν υπάρχουν σχόλια: Σύνδεσμοι σε αυτήν την ανάρτηση

Everything Must Go! The Great European Fire Sale

VIEW GALLERY
ΠΗΓΗ: Independent
What do Rome's 2020 Olympic bid, Portugal's Shrove Tuesday carnival, Greece's sunlight, Ireland's National Stud, Spain's national lottery and Britain's national air traffic control service have in common? Answer: they are all being either sold or cancelled by European governments desperate to whip their public finances back into shape after a decade of living beyond their means.
Such measures would once have suggested incomprehensible panic. Now everyone's at it. It would have been more surprising if Mario Monti hadn't called off an Olympic bid that could have swallowed up €9.5bn (£8bn) that his near-bankrupt nation didn't have.
But it's not just radical belt-tightening that we're seeing. A remarkable number of nations are also doing the equivalent of selling the family silver, in a Europe-wide fire sale of state assets with no obvious precedent.
Διαβάστε περισσότερα »
Αναρτήθηκε από You Pay Your Crisis στις 6:38 μ.μ. Δεν υπάρχουν σχόλια: Σύνδεσμοι σε αυτήν την ανάρτηση

February 15, 2012
Since the fifth review, a number of developments have pointed to a need to revise the
DSA. The 2011 outturn was worse than expected, both in terms of growth and the fiscal
deficit; the macroeconomic outlook has deteriorated significantly, due to events in
Europe; the fiscal outlook has deteriorated due to the economy and due to delays in
developing fiscal-structural reforms; and the strategy of the program has been adapted,
to place greater emphasis on upfront actions to improve competitiveness (which will
change the expected profile of the recovery and have implications for the fiscal accounts).
The DSA also must be updated to include the envisaged PSI deal between the IIF-led
creditor group and the Greek authorities
The assessment shows that, in a baseline scenario, public debt will decline to around 129
percent of GDP by 2020, staying above the 120 percent of GDP level targeted by
European leaders in October. The results point to a need for additional debt relief from
the o icial or private sectors to bring the debt trajectory down, consistent with the
objective of achieving a 120 percent of GDP debt ratio by 2020. The results will need to
be updated once information on additional debt-reducing actions is available.
There are notable risks. Given the high prospective level and share of senior debt, the
prospects for Greece to be able to return to the market in the years following the end of
the new program are uncertain and require more analysis. Prolonged financial support
on appropriate terms by the o icial sector may be necessary. Moreover, there is a
fundamental tension between the program objectives of reducing debt and improving
competitiveness, in that the internal devaluation needed to restore Greece
competitiveness will inevitably lead to a higher debt to GDP ratio in the near term. In this
context, a scenario of particular concern involves internal devaluation through deeper
recession (due to continued delays with structural reforms and with fiscal policy and
privatization implementation). This would result in a much higher debt trajectory, leaving
debt as high as 160 percent of GDP in 2020. Given the risks, the Greek program may
thus remain accident-prone, with questions about sustainability hanging over it 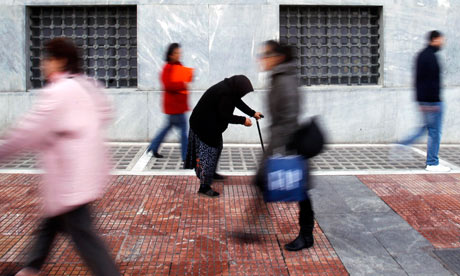 A woman begs as shoppers walk by in central Athens as Greeks resigned themselves to the €130bn bailout. Photograph: Yannis Behrakis/Reuters
ΠΗΓΗ: GUARDIAN
by Larry Elliott
A stay of execution. The most expensive sticking plaster in the world. A rescue deal with shallow foundations. That was the snap assessment of the markets on Tuesday about the 4am deal struck in Brussels to spareGreece the indignity of going bust and to keep alive the myth that theeuro is working.
The pundits could be wrong. It is possible that the €130bn (£110bn) bailout will mark a turning point and in a decade's time Greeks will be looking back on the dark days of 2012 in the way that the newly prosperous Germans looked back in the 1960s to their war-ravaged economy in 1945.
It is all so simple: for a new wonder economy to arise in the Aegean what has to happen is for Greece's recession to end immediately, for the economy to have six consecutive years of strong growth from 2014 onwards; for the Greeks to submit to their eurozone partners' humiliating terms; for the bailout to be given the thumbs-up by the sceptical parliaments in Germany, Finland and the Netherlands, and for the assorted hedge funds, banks and insurers that make up Greece's private-sector creditors to accept a 53% "haircut" on their investments.
Διαβάστε περισσότερα »
Αναρτήθηκε από You Pay Your Crisis στις 11:23 π.μ. Δεν υπάρχουν σχόλια: Σύνδεσμοι σε αυτήν την ανάρτηση

ΠΗΓΗ: Washington Post
Late Monday night, the euro zone agreed to a $170 billion bailout package for Greece in exchange for certain budgetary oversight measures and economic reforms. We asked a group of experts and economists to weigh in on the deal — and whether it’s enough to hold Greece — and Europe — together. Here are their reactions:
Kevin Featherstone, professor of contemporary Greek studies at the London School of Economics:
“Will the deal work? With this deal, Greece has only overcome the first of several hurdles. It remains to be seen whether the package will continue to be challenged by strikes and protests. Even then, there must be questions as to whether the necessary structural reforms can be implemented in a full and effective manner by an underperforming administrative system.
“At the same time, it is very important to question the content and schedule of the package being imposed on Greece by the Troika [the International Monetary Fund, European Commission and European Central Bank]. It stresses clumsy across the board cuts calibrated by fiscal constraints, rather than a coherent set of choices that might lead Greece towards a better model. In this sense, the package is too closely set to appease the insularity of foreign voters, rather than to achieve the shared interest of returning Greece to growth and putting the euro-zone on a more solid basis. In time, this bias will need to be adjusted.”
Διαβάστε περισσότερα »
Αναρτήθηκε από You Pay Your Crisis στις 8:28 π.μ. Δεν υπάρχουν σχόλια: Σύνδεσμοι σε αυτήν την ανάρτηση