ΠΗΓΗ: Der Spiegel
By Peter Müller, Christian Reiermann and Christoph Schult
Wolfgang Schäuble hates being disturbed on Saturday afternoons. That's when Germany's finance minister, a huge soccer fan, likes to watch the games of his favorite team, Bayern Munich, on TV.
On Saturday April 2, Schäuble's job obligations spoiled his fun when he was forced to take part in a conference call. Waiting on the line were his colleagues in other important euro-zone countries, including French Finance Minister Christine Lagarde, European Monetary Affairs Commissioner Olli Rehn and Jean-Claude Trichet, president of the European Central Bank (ECB).
The reason for the disturbance was a crisis that had already ruined many of Schäuble's weekends in recent months -- even more so than Bayern's crummy playing this season: Once again, it was about the state of the European monetary union and the issue of how financially troubled member states should be assisted.
After a year full of financial woes, cash shortages and near-bankruptcies, the situation has become anything but reassuring. In fact, in recent weeks, the euro crisis has gotten even worse.
Διαβάστε περισσότερα »
Αναρτήθηκε από You Pay Your Crisis στις 11:13 μ.μ. Δεν υπάρχουν σχόλια: 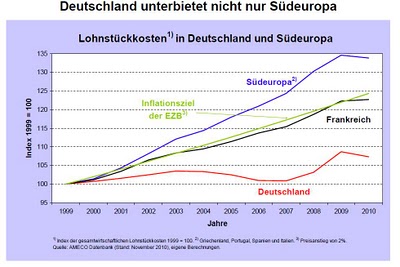 Just as a reminder that others have problems: Cezmi Dispinar points me to a post with an excellent chart about the problem of adjustment:

Sorry that it’s in German — but it shows unit labor costs, with 1999=100. The red line is Germany; the black line is France; the green line is the ECB’s 2 percent inflation target; the blue line is southern Europe.
The point is that the introduction of the euro led to a period of low interest rates in southern Europe, triggering an inflationary boom; when the boom ended, they were left uncompetitive with northern Europe. And the ECB is in effect demanding that all the removal of that competitiveness gap take place via deflation in the south, none of it through inflation in Germany.