Why German Europe is a non-starter

Πηγή: GAZETA WYBORCZA WARSAW
It's become a commonplace Berlin is to impose its political vision and economic order upon the EU. Not so simple, says a Gazeta Wyborcza columnist, because its social model is in decline and it is no more prepared than its partner political union.
Piotr Buras
Many myths have accrued around the question of Germany’s European policy, myths that do not make it easier to fully grasp the gravity of today’s situation. At least two of those beg for explanation.
The first myth says that Germany – the greatest beneficiary of the single currency and Europe’s largest economy – has renounced its solidarity with the rest of the continent and turned its back on it. In reality, without Germany’s support the eurozone would have crashed long ago. Over the last three years, Berlin has offered over 200 billion euros in loans and credit guarantees to troubled eurozone member states.
The second myth holds that – despite the crisis – Germany has it so good today that the country has lost its interest in Europe and instead looks for partners in countries like China or Brazil. Granted, it was trade with those countries that drove Germany’s growth in the first quarter of 2012 despite the deteriorating market conditions.
Διαβάστε περισσότερα »
Αναρτήθηκε από You Pay Your Crisis στις 10:24 μ.μ. Δεν υπάρχουν σχόλια: Σύνδεσμοι σε αυτήν την ανάρτηση 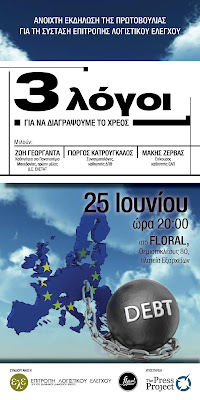 Can the rest of Europe stand up to Germany?

Πηγή: REUTERS
by  Anatole Kaletsky
As financial markets slide toward disaster, scarcely pausing to celebrate the “success” of the Greek election or the deal to recapitalize Spanish banks, the euro project is finally revealing its fatal flaw. One country poses an existential threat to Europe – and it is not Greece, Italy or Spain. Every serious proposal to resolve the euro crisis since 2009 – haircuts for bank bondholders, more realistic fiscal consolidation targets, jointly guaranteed eurobonds, a pan-European bailout fund, quantitative easing by the European Central Bank – has been vetoed by Germany, and this pattern looks likely to be repeated next week.
Nobody should be surprised that Germany has become the greatest threat to Europe. After all, this has happened twice before since 1914. To state this unmentionable fact is not to impugn Germans with original sin, but merely to note Germany’s unusual geopolitical situation. Germany is too big and powerful to coexist comfortably with its European neighbors in any political structure ruled purely by national interests. Yet it isn’t big and powerful enough to dominate its neighbors decisively, as the U.S. dominates North America or China will dominate the Far East.
Διαβάστε περισσότερα »
Αναρτήθηκε από You Pay Your Crisis στις 12:16 π.μ. Δεν υπάρχουν σχόλια: Σύνδεσμοι σε αυτήν την ανάρτηση