Anatomy of a Bank Run

The escalating run on the banks on Europe’s periphery is now front page news. Even the Germans no doubt realize that moving on a scale great enough to arrest such a bank run will risk potential Target 2 losses on a huge scale. The odds are some kind of huge ECB efforts to stem this run is at hand. If not, they risk a fully fledged banking collapse.
The European System of Central Banks (ESCB) is quite complex. The “backdoor” lender of last financing of the banks in the PIIGS that are losing deposits through the ECB is less than transparent. In spite of its complexities, the ECB can move quickly to arrest this problem. Of all the financial maladies that exist, the one with which the world has the most experience and therefore has developed the most effective tools to address is a bank run.
It is therefore a bit of a puzzle why one of the most commonly cited fears about a Greek departure from the Eurozone is that it would lead to a bank run in other Eurozone countries. The reason for the fears, as with all things European, is that politics prevents a common sense response. Politics is an obstacle, but in that panicked weekend in the future when the powers that be are worried about what might happen on Monday morning, all of the theoretical political obstacles that had prevented action will be forgotten. The points are obvious ones, but sometimes it is useful to reiterate the obvious in order to identify the real risks that exist in as complicated a set of circumstances as a Greek departure from the Eurozone might entail.


The obvious point to make is that deposit insurance is a proven cost-effective way of limiting downside risk in a financial meltdown. Bank runs are liquidity problems, not solvency problems. This is important because insolvent institutions rarely fail as long as they are liquid. Thus, it is not necessary to restore the solvency of an institution when a bank run develops and incur all the trouble and expense that this entails. All one need do is reassure depositors that they have access to their money. Moreover, keeping deposits in a bank eliminates the need to liquidate the asset side of the balance sheet at fire sale prices. Even a normally solvent institution can become insolvent if it were forced to liquidate its assets too rapidly.
The run on the banks on Europe’s periphery is already huge and is accelerating. In a FT article Gavyn Davies provided a table and a chart that illustrate this point. 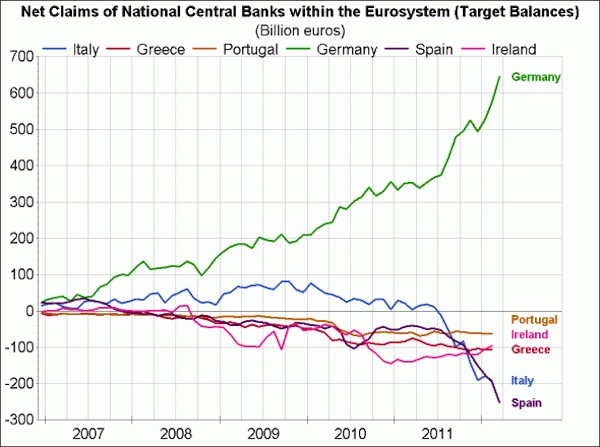 And from David Mackie at JP Morgan: